Hubert Cumberdaleis the deuteragonist of the Salad Fingers series. He appears with Jeremy Fisher and Marjory-Stewart Baxter, though he gets more cameos in the series. Compared to the other two puppets, though, Salad Fingers appears to dislike Hubert and often describes him with negative terms, like having an unpleasant taste. However, Hubert seems to have the most connection with Salad Fingers.

Like Jeremy, Hubert gains a humanoid form in Friends. However, it is more malevolent in nature, making a screeching noise when interacted with.

In Glass Brother, Salad Fingers brings Hubert to life by stitching a suit made of flesh around the puppet. The puppet was able to talk, but his legs do not work. He moves by slithering on his stomach, dragging his legs from behind.

Hubert is a white finger puppet with a sewn on mouth and black dots for eyes. He wears a dim colored yellow shirt with stains on it and a dark blue bandana. In Birthday episode eleven, Salad Fingers encased Hubert in a suit of human skin, supposedly Harry's, giving him the appearance of a "flesh boy." This was short-lived however, as Hubert in his puppet form appears again in Post Man. 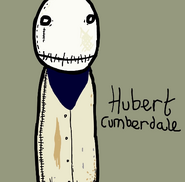 The same image but with a caption.

Hubert with much higher graphics, in episode 11, Glass Brother, smiling.

Hubert Cumberdale after his transformation.

Hubert in his flesh boy state. 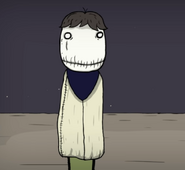